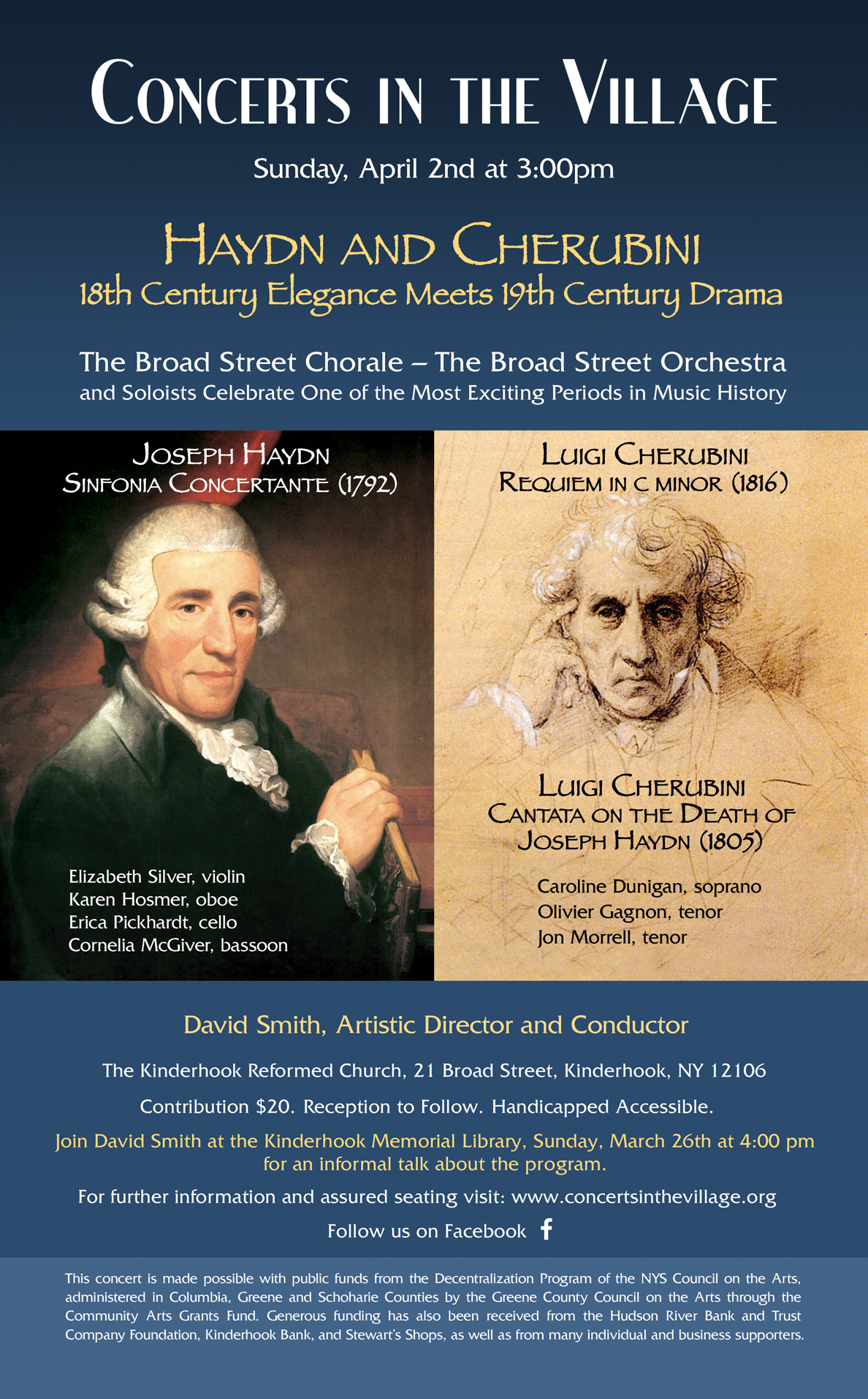 At 3:00 p.m. on Sunday, April 2, at the Kinderhook Reformed Church in Kinderhook, NY, Concerts in the Village (CITV) concludes its seventh season with Haydn and Cherubini – 18th c. Elegance meets 19th c. Drama. The Broad Street Chorale, Broad Street Orchestra, and soloists celebrate one of the most exciting periods in music history, as the elegantly balanced musical world of late Classicism is disrupted upon the dawn of the Romantic Age – a transformation making possible the contributions of Beethoven, Schumann and Brahms to follow.

No other composer, except possibly Mozart, conveyed Classical style and form as perfectly and consistently as Joseph Haydn. And no work of Haydn confirms this more convincingly than his Sinfonia Concertante in B-flat of 1792. In it symphonic breadth is ingeniously combined with the virtuosity of a concerto. But this is no ordinary concerto, rather one for multiple instruments presented in continuously changing combinations. For its upcoming program CITV Artistic Director and Conductor David Smith has not had to look far to find ideal soloists. Featured will be principal players from CITV’s own Broad Street Orchestra: Elizabeth Silver, concertmaster; Erica Pickhardt, cellist; Karen Hosmer, oboe: and Cornelia McGiver, bassoon. Smith observes, “Bringing these four outstanding musicians together is guaranteed to produce very exciting results, and in the process we will honor our orchestra’s impressive depth of talent. I know we will make this lively work sparkle.”

Something special follows, as the second work on CITV’s April program may possibly be having its American premiere. In 1805 a report circulated that the great Joseph Haydn had died. At that time the stature of no composer was more highly held and an appropriate musical tribute was commissioned. The well known Italian- born, but Paris-based Luigi Cherubini was approached to do the honors. His Cantata on the Death of Joseph Haydn was the remarkable result. There was, however, one important miscalculation (two centuries later something that would have been regarded as “fake news”): Haydn was still very much alive, and not to die until four years later! According to Smith, “However wrongly motivated, the colorful Cantata on the Death of Joseph Haydn for full orchestra, soprano and two tenors, certainly deserves a 21st century performance. And I assure you the work is anything but funereal. Its rich instrumental and vocal color, and melodic sweep will be broadly appealing to our listeners.” Soloists in this fascinating work will be soprano Caroline Dunigan, and tenors Olivier Gagnon and Jon Morrell.

Cherubini’s great Requiem in c minor is in a class with the more often performed requiems of Mozart, Brahms, Verdi and Fauré. Written to commemorate the dramatic beheading of Louis XVI during the French Revolution, this work was so highly regarded that it was chosen for performance at the great gathering memorializing Beethoven immediately following his death in 1827. David Smith points out that “although none other than Arturo Toscanini programmed and recorded Cherubini’s Requiem in c minor in 1937 and Riccardo Muti has done so more recently, performances are not common. Listeners will experience both fierce tempest and remarkable calm − in the span of a mere 35 minutes. This fascinating piece has it all, even a gong! I believe the response of CITV listeners will be a resounding ‘thank you’ for bringing this great, but neglected work to us.”