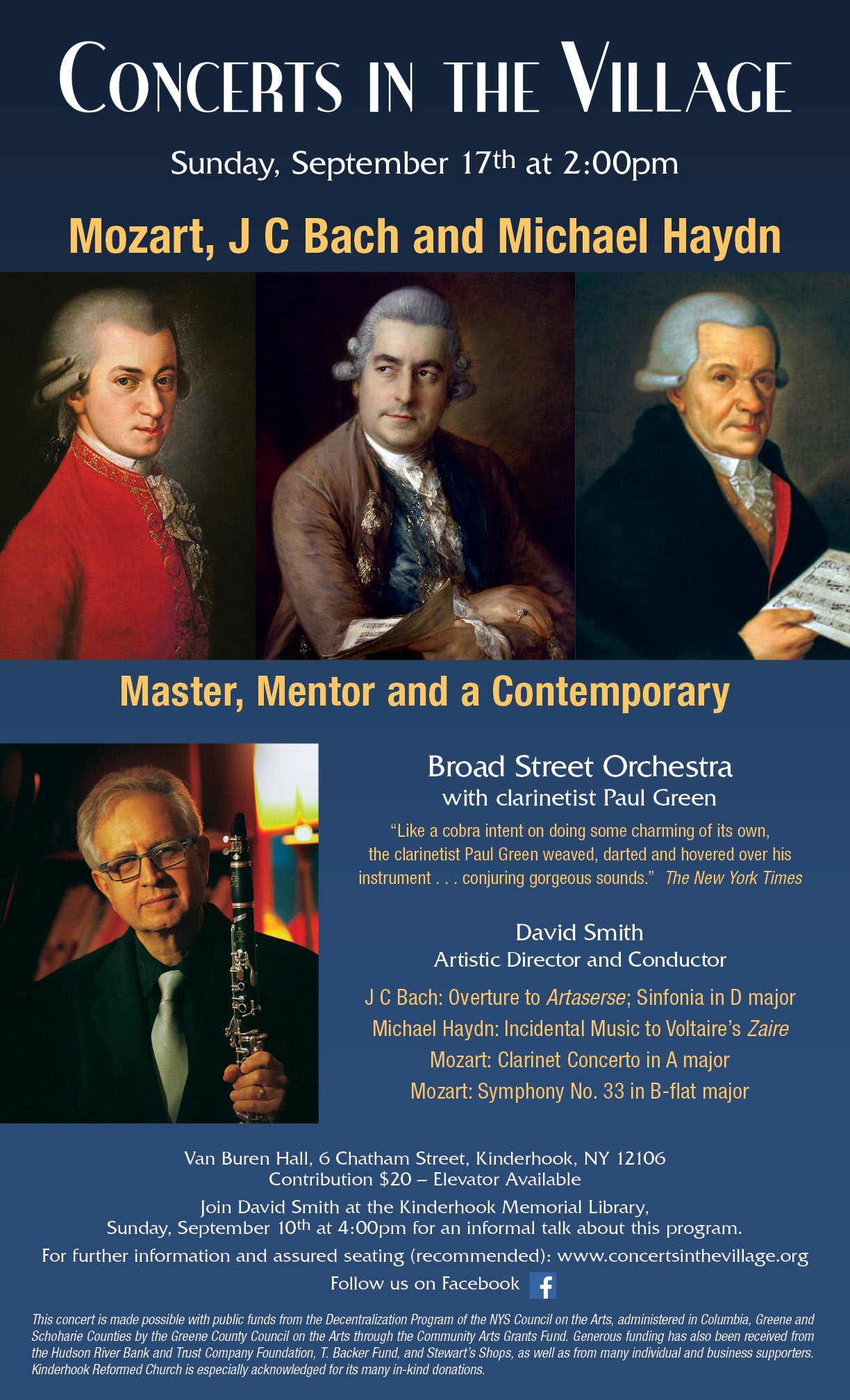 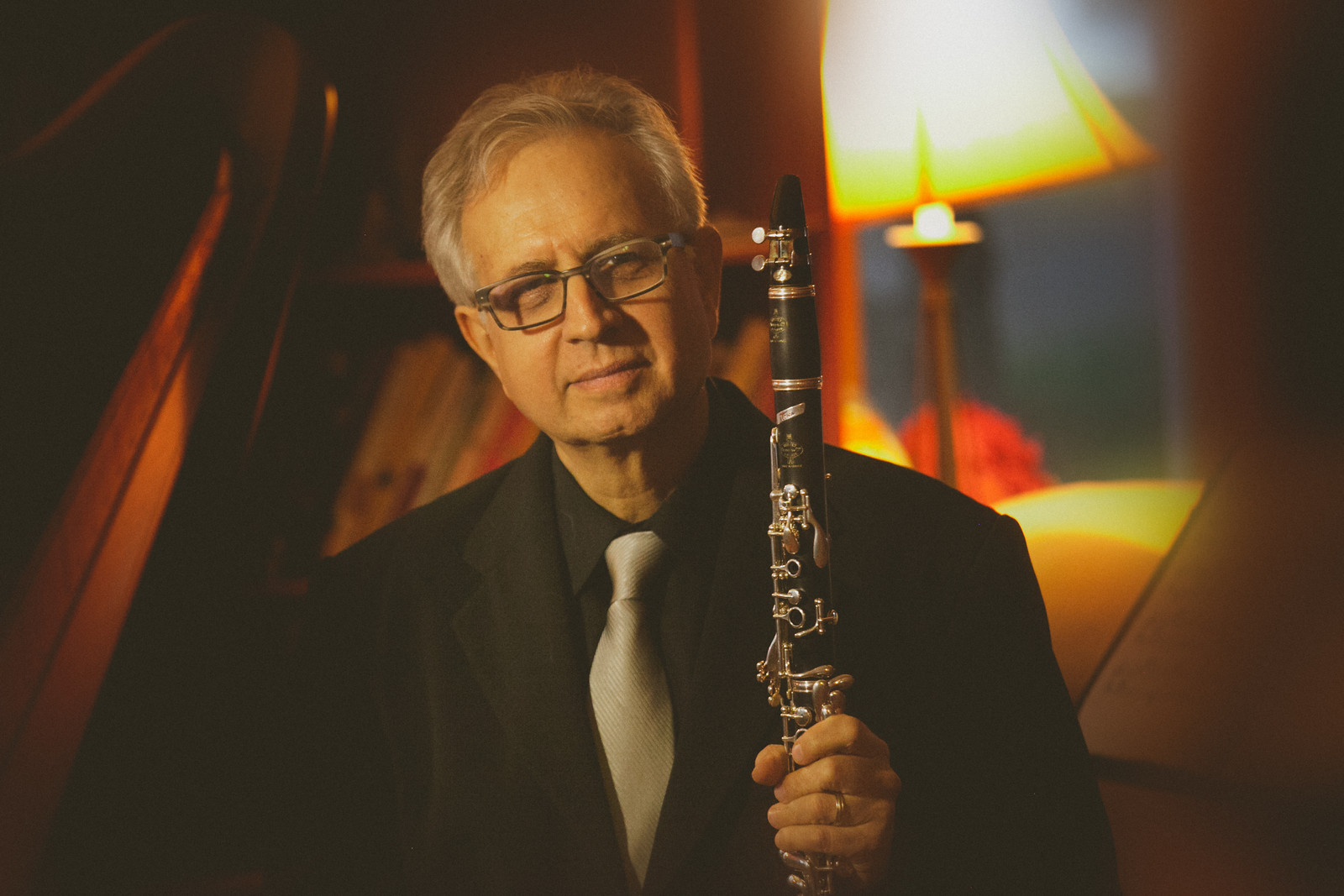 According to David Smith, CITV’s Artistic Director and Conductor, “For this concert I am delighted to be returning to the second floor of the Kinderhook Village Hall, recently renamed Van Buren Hall. As we discovered last October when reintroducing this space for performance, it is acoustically ideal and nicely scaled for our audiences. Both listeners and musicians have raved over the warmth, balance and clarity of its sound. In a region with few midsize locations suitable for classical music, it is a dream, perfect for both chamber and chamber orchestral programs.”

“The upcoming program is designed to remind us that, for all his extraordinary precociousness, Mozart was not without the important influence of others, most notably Johann Sebastian Bach’s youngest son, Johann Christian. J.C. was born in Leipzig and initially trained by J.S. Upon his father’s death, he was sent off for further studies with his well-known step-brother Carl Philip Emanuel. A long stay in Italy followed, and his fame rose as a prolific composer in the early classical style, notably of operas. About 1762 he was called to the court of England and in London became even more artistically and commercially successful, soon enough throughout much of Europe. Of the four composing children of J.S. Bach, “John Bach” as he became known was by far the most cosmopolitan. Closely nurturing the development of his son Amadeus, in 1764-65 Leopold Mozart chose to spend over a year in London in order to have his remarkable 8-year old son mentored by the highly respected and stylish J.C. Bach. Leopold’s timing was perfect and the match of teacher and student ideal. The music presented in our program makes clear how remarkably strong J.C. Bach’s influence was on Mozart’s stylistic development, including compositional features that remained throughout Mozart’s brief, but productive life.”

For one of Mozart’s most famous works, his late Clarinet Concerto, the all-professional Broad Street Orchestra welcomes a special guest. Of Paul Green the New York Times has written: “Like a cobra intent on doing some charming of its own, the clarinetist Paul Green weaved, darted and hovered over his instrument . . . conjuring gorgeous sounds.” Mozart will also be represented by his charming, but somewhat infrequently performed Symphony 33.

Although senior to Mozart, Michael Haydn, younger brother of the more famous Joseph, has been described as a “musical kinsman.” At one point Michael, Amadeus and Leopold Mozart played together in the court orchestra at Salzburg, and the Mozart and Haydn families were fairly close. Listeners will sense this connection when hearing Michael Haydn’s very colorful, even somewhat exotic Incidental Music to Voltaire’s Zaire. The “Turkish” features found in this music are also evident in Mozart’s music, most famously in his Abduction from the Seraglio.

As David Smith notes: “By programming these very appealing works of Johann Christian Bach, Amadeus Mozart and Michael Haydn – respectively mentor, master and contemporary – we give the listener special insight into the development of one of music’s greatest composers. Of equal importance, we will offer our audience an exceptionally fine afternoon.”

For further information and assured seating fill out our web form on this page or call 518-758-6869.

Join David Smith at the Kinderhook Memorial Library, at 4:00 p.m., Sunday, September 10th for an informal talk about this program.