Including works of Schubert, Brahms, Debussy, Luzzaschi, Roussel, Shaw, and others

Mezzo-soprano SarahAnn Duffy will be making her CITV debut. Recent appearances for Ms. Duffy have included works of Mozart and Monteverdi with dell-Arte Opera Ensemble, and the premiere of

Theofanidis’ Cows of the Apollo with the Aspen Opera Theater Center. She has also appeared with the Albany Symphony Orchestra. This fall she becomes an Apprentice Artist at Palm Beach Opera.

Chinese-American mezzo-soprano Sun-Ly Pierce’s passion for music of all genres has resulted in performances throughout the world, including Austria, Great Britain, and the United States. This summer she will be a Vocal Fellow at the Music Academy of the West, performing in Jennifer Higdon’s Cold Mountain. This will be Ms. Pierce’s second CITV appearance, following her well-received February debut in Berlioz’ Les nuits d’été.

Praised by the Boston Globe for “a rich voice that could go in a blink from speaking to soaring,” soprano Paulina Swierczek combines technical facility with a consuming passion for communication. She has been honored twice as a Tanglewood Fellow. This will be her third CITV appearance, following A 19th Century German Song Book and the Mozart Requiem in 2018. Other appearances include the Albany Symphony Orchestra and, for her international opera debut, performances in Mexico.

Baritone Brad Testerman, a recent graduate of the Peabody Conservatory of Johns Hopkins University, is a singer who enjoys performing both as a soloist and in collaboration with colleagues. Appearances include Peabody Opera Theater, Baltimore Lyric Opera, and the Baltimore Symphony. In February Mr. Testerman performed Ravel’s song cycle Don Quichotte à Dulcinée with CITV’s Broad Street Orchestra.

Hailed for her “haunting, dulcet soprano tone,” South Korean soprano SeolAh Yoo is a singer with an extensive repertoire. Recent performances include Haydn’s “Lord Nelson” Mass, Harbison’s Full Moon In March, and Mozart’s Die Zauberflöte with the Albany Symphony Orchestra. This coming July 20th at PS21 in Chatham, Ms. Yoo will be the first soprano soloist in CITV’s offering of Bach’s Mass in B minor, with the Chatham Festival Chorus, Broad Street Orchestra and four other distinguished soloists.

Praised by the Rochester City Newspaper for her “honeyed tone” and by the Boston Globe for “a rich voice that could go in a blink from speaking to soaring,” as well as her “killer side-eye,” soprano Paulina Swierczek is a vibrant story-teller, combining technical facility with a consuming passion for communication. Recent concert highlights include Poulenc’s Gloria, Haydn’s “Lord Nelson” Mass, Bachianas Brasileiras no. 5 of Villa-Lobos, and Schoenberg’s Pierrot Lunaire. Favorite roles include The New Prioress (Les dialogues des Carmelites), Donna Anna (Don Giovanni), and the Countess Almaviva (Le nozze di Figaro). She made her international operatic debut in November, 2016 at the Teatro Diana in Mexico premiering Don’t Blame Anyone by Carlos Sanchez-Guttierez and Ricardo Zohn-Muldoon. A 2017 Fellow of the Tanglewood Music Center, she performed Berg’s Sieben Frühe Lieder with the TMC Orchestra, songs of Ella Fitzgerald alongside Dawn Upshaw and Stephanie Blythe, and works by J. S. Bach led by John Harbison. She also premiered Anthony Cheung’s All Thorn, but cousin to your rose, featuring texts of Nabokov, Pushkin and Poe alongside curator and longtime ICE member Jacob Greenberg. 2017-18 season highlights included a concert of the music of David Del Tredici, to celebrate the composer’s 80th birthday, a debut with the Albany Symphony singing Madame Herz in Der Schauspieldirektor, and the Queen in John Harbison’s Full Moon in March at Bard College, directed by Alison Moritz and conducted by James Bagwell. She was honored to have been invited back to the Tanglewood Music Center for its 2018 season, and the Bernstein Centennial year. Paulina attended the Eastman School of Music under the tutelage of Rita Shane, Dr. Constance Haas and Anthony Dean Griffey, and also studied with the late Sanford Sylvan.

Hailed by The Strait Times Singapore for her “haunting, dulcet soprano tone,” South Korean soprano SeolAh Yoo is a frequent performer with an extensive repertoire. As a fellow member of the Vocal Academy of the Pacific Music Festival, she performed in the PMF Gala Concert in Japan in the summer of 2018. Recent performances include the soprano solo in Haydn’s “Lord Nelson” Mass, First Attendant in John Harbison’s Full Moon In March, and excerpts of the First Lady in Mozart’s Die Zauberflöte with the Albany Symphony Orchestra. She has made debuts with the Singapore Symphony Orchestra led by Jason Lai and the Singapore Lyric Opera led by Wong Kah Chun. Passionate about new music, SeolAh also premiered Rita Ueda’s opera One Thousand Cranes, singing the role of Mayumi. She performed the roles of Sandman and Dew Fairy in Humperdinck’s Hansel and Gretel at Peabody Conservatory, where she was also the soprano soloist in Haydn’s Harmoniemesse under the baton of Edward Polochick. Attending Seoul Arts High School in South Korea, SeolAh won first prize in the 23rd Korean Voice Competition. She received her bachelor’s degree in music through the Joint Degree Program offered by the National University of Singapore and the Peabody Conservatory. She is a second-year student in the Graduate Vocal Arts Program at the Bard College Conservatory of Music, where she studies with Edith Bers.

Mezzo-soprano SarahAnn Duffy has most recently appeared as Zerlina in Mozart’s Don Giovanni with dell’Arte Opera Ensemble, as Maria in Ottorino Respighi’s Laud to the Nativity with the Bard College Conservatory’s Graduate Vocal Arts Program curated by Dawn Upshaw, the alto soloist in Handel’s Messiah with Classics on Hudson, and as Rose in Star Wars: The Last Maestro with the Albany Symphony and David Alan Miller. She has also appeared as Ljubica in the Serbian opera Svadba (Ana Sokolovic), and as the alto in a staged production of Stravinsky’s Pulcinella, as well as a soloist in Haydn’s “Lord Nelson” Mass with the Bard College Conservatory’s Chamber Choir led by James Bagwell. This summer, she will be covering the role of Lucia in Rossini’s La gazza ladra as a Studio Artist at Teatro Nuovo, formerly known as the Caramoor Summer Music Festival, directed by William Crutchfield. In the fall, SarahAnn will be an Apprentice Artist at Palm Beach Opera. Other events in the 2019 season include a concert premiering contemporary art songs at National Sawdust. Additional recent performances include Valetto in Monteverdi’s L’incoronazione di Poppea with dell’Arte Opera Ensemble, and the premiere of Christopher Theofanidis’ Cows of the Apollo with Robert Spano at the Aspen Opera Theater Center. SarahAnn received her Bachelor of Music degree from the New England Conservatory and is a current member of the Graduate Vocal Arts Program at the Bard College Conservatory, under the mentorship of Dawn Upshaw and Kayo Iwama, and where her vocal studies are with Lorraine Nubar.

Chinese-American mezzo-soprano Sun-Ly Pierce’s passion for music of all genres has led her to an eclectic range of performance opportunities. She has participated in festivals and programs such as the Vienna: Language of Lieder program in Austria and the Oxford Lieder Festival in England. Credits from the Eastman Opera Theatre include Umberto Giordano’s Mese Mariano (Suor Pazienza), Giacomo Puccini’s Suor Angelica (The Nursing Sister) and Mozart’s Le nozze di Figaro (Cherubino). The Rochester City Newspaper cites Pierce’s performance of the young pageboy as having “…sparkled with enduring comedic flair. Vocally, her musical gravitas was anchored in an honest, substantive timbre and light, buoyant phrasing.” In addition to winning the Rochester Lyric Opera LaDue Competition in 2016, Pierce made her debut with the Albany Symphony Orchestra conducted by David Alan Miller that winter. This past spring she sang the role of Nada in the Serbian opera Svadba (Ana Sokolović, 2015) with members of the Graduate Vocal Arts Program at Bard College Conservatory of Music. Pierce also returned to collaborate with the Albany Symphony over the summer in the premiere of “A big bundle of sticks” by composer Ben Wallace. Recently she participated in the musical celebration of composer Joan Tower’s 80th birthday at the DiMenna Center for Classical Music in New York City and gave her first performance as the mezzo-soprano soloist in Handel’s Messiah with the Mohawk Valley Choral Society in Utica, NY. This summer she will be singing the role of Olivia in the west coast premiere of Jennifer Higdon’s Cold Mountain at the Music Academy of the West, as a 2019 Vocal Fellow. Originally from Clinton, NY, Pierce graduated from the Eastman School of Music in 2016. She currently studies with Lorraine Nubar in the Graduate Vocal Arts Program at Bard College Conservatory of Music, led by Dawn Upshaw and Kayo Iwama. In her spare time, Pierce enjoys the outdoors, visiting aquariums, gas station coffee and eating breakfast at any point in the day.

Baritone Brad Testerman is a singer who enjoys performing both as a soloist and in collaboration with colleagues. Brad benefits from experience not only as a vocalist, but also as a classical saxophonist and pianist. Previously resident in Baltimore, Brad has performed with many groups, including the Peabody Opera Theater, Baltimore Lyric Opera, Young Victorian Lyric, Baltimore Concert Opera, Baltimore Chamber Choir, Concert Artists of Baltimore, and the Baltimore Symphony. He has also frequently appeared as a recitalist in the Baltimore area. Versed in many different styles, Brad is comfortable with music ranging from opera and art song to musical theater and cabaret. Passionate about new music, he hopes to be a force in creating new chamber opera and art song. This past fall Brad was featured as the baritone soloist in Vaughan Williams’ “Fantasia on Christmas Carols” at the Bard College Conservatory of Music’s Winter Songfest. Brad graduated from the Peabody Conservatory of Johns Hopkins University with degrees in vocal performance and saxophone performance. Currently he is a first-year student in the Graduate Vocal Arts Program at the Bard College Conservatory of Music under the mentorship of Lorraine Nubar, Dawn Upshaw, and Kayo Iwama. 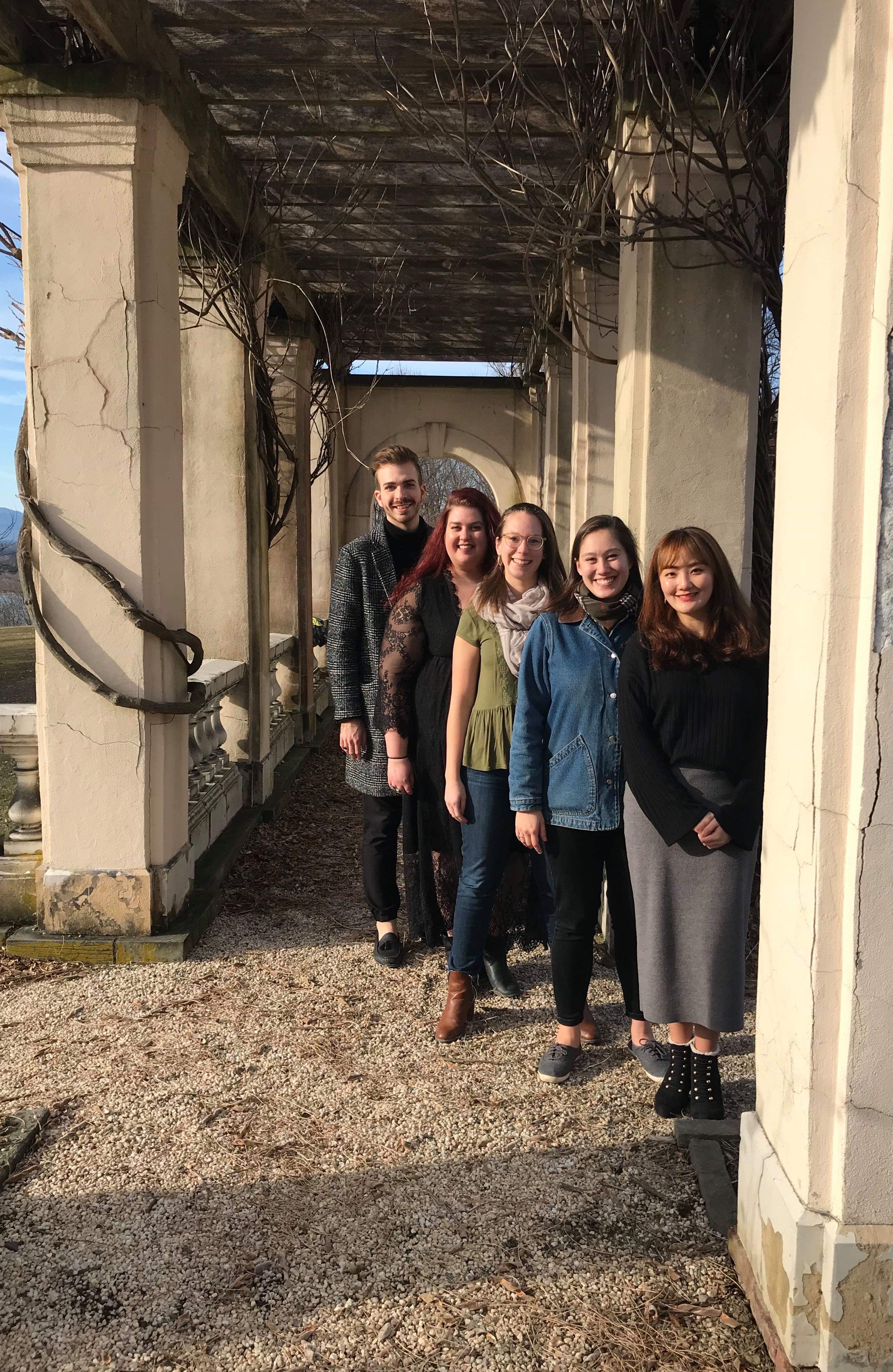