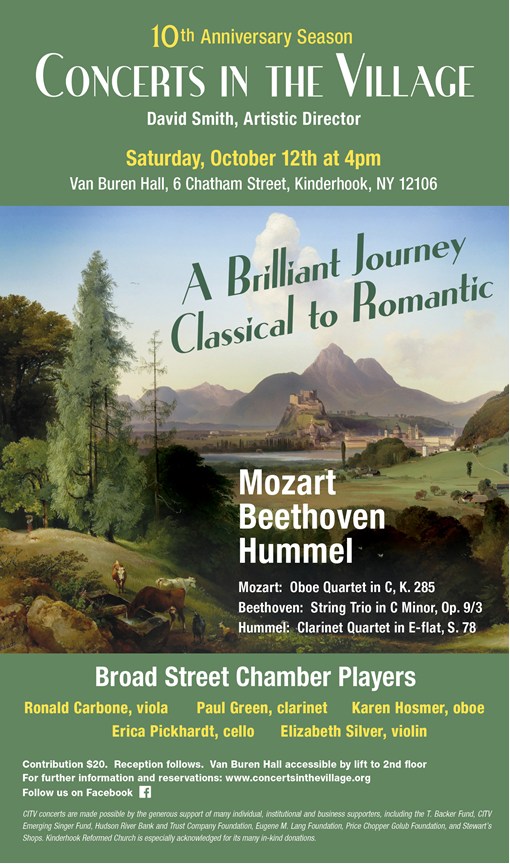 A Brilliant Journey – Classical to Romantic

The earliest work on the program will be Mozart’s quartet, K. 285. Completed about 1777 and originally for flute and in D major, this very spirited work has for this concert been transcribed for oboe and transposed to C major. Says CITV Artistic Director David Smith, “To perform this quartet in transcription and transposed is not as outrageous as it might at first seem. In the 18th century oboists often doubled as flutists or as recorder players. As precedent there is an important reverse example: Mozart’s Oboe Concerto in C Major of 1777 was a year later reworked as his Flute Concerto in D Major! For the listener’s enjoyment we have created a musically ideal and historically appropriate adaptation for the outstanding oboist Karen Hosmer.”

Twenty years later Beethoven composed his three trios for strings, op. 9, the third of which will be performed on October 12th. Although Beethoven’s string trios were written before any of his quartets (also before his symphonies), in quality and interest they are the equal of the composer’s more famous quartets. The string trios were essential to Beethoven’s development as a composer. As the composer’s only string trio in a minor key, op. 9/3 is specifically notable for its tonal richness and its boldly unpredictable gestures. Although in form all of Beethoven’s trios look back to Mozart, at the same time their style suggests what is to follow as the Romantic Period unfolds.

That “romantic” future was more fully expressed in the remarkable, but less well-known works of Johann Nepomuk Hummel, including his very expressive Clarinet Quartet of 1808. David Smith observes that “Hummel’s talents were well established early on and widely recognized. By the age of eight he was known to be Mozart’s favorite pupil, even living with the Mozart family for two years. Also a pupil of Clementi, Hummel was a famously brilliant pianist and conductor, who was invited to improvise at Beethoven’s memorial concert. Schubert honored Hummel with the dedication of his final three piano sonatas. Hummel’s remarkable music, certainly including his clarinet quartet, made possible the full blossoming of Romanticism in the works of Mendelssohn, Schumann and Brahms. (As a curious local note, Hummel’s older son Eduard, also a musician, spent his final years in Troy, New York.)

David Smith assures CITV listeners that “On October 12th, in a mere 90 minutes we will enjoy outstanding performances of three very appealing works from one of music’s most important transitional periods, with Mozart looking forward, Beethoven backward and forward, and Hummel providing an ingenious summation of both. Finer works are hard to imagine!”