Vocal and Orchestral Music from France 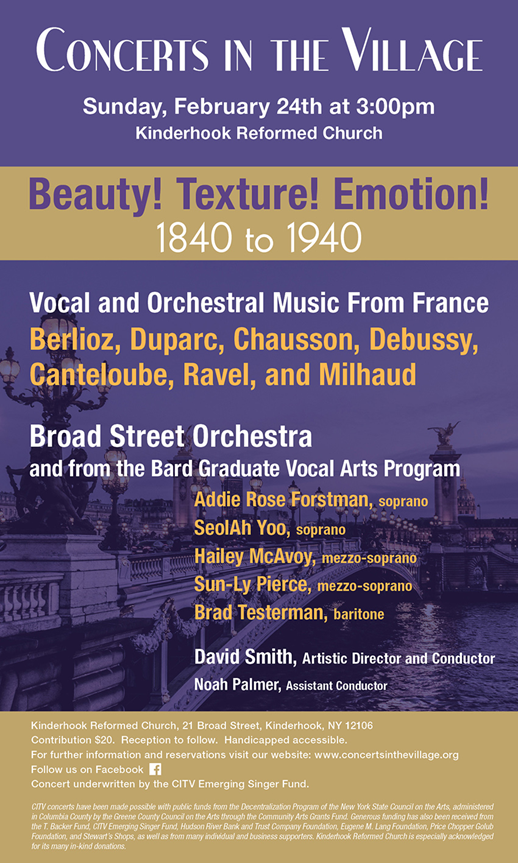 We include seven remarkable works from the 19th and 20th centuries, for orchestra and for voice with orchestra, by Berlioz, Duparc, Chausson, Debussy, Canteloube, Ravel and Milhaud.

This will be the second concert underwritten by CITV’s Emerging Singer Fund established in 2018 by the largest single gift in CITV’s history. During the current 2018-2019 season this fund is underwriting three concerts, two with orchestra. Each of these concerts is an addition to those regularly funded by CITV and presented as part of the its season. The intent of this initiative is to provide performing opportunities, particularly with orchestra, for exceptional singers engaged in advanced studies, especially those in the Bard Graduate Vocal Arts Program (Dawn Upshaw, Artistic Director). It is also designed to benefit those who have already completed their studies at Bard, as well as other singers in the critical early years of their careers.

We begin the February CITV program with the well-known Les nuits d’été, a collection of songs written in 1840 by Hector Berlioz, regarded by many as the most defining figure in the development of French music in the first half of the 19th c. For these songs the soloist will be mezzo-soprano Sun-Ly Pierce. Ms. Pierce  (www.sunlypiercemezzo.com) has performed in Austria, England and the United States, including an appearance with the Albany Symphony Orchestra.

The tone poem Lénore follows, an emotionally charged work written in 1875 by Henri Duparc, a composer much better known for his songs. This will be a long overdue opportunity to hear this dramatic work, last performed by the Boston Symphony Orchestra in 1896 and seldom performed by any American orchestra since the 19th c.!

In 1893 the brilliant composer Ernest Chausson, who was much admired by Debussy, wrote the lushly orchestrated song La Mort de l’amour, the third part of his extended work Poème de l’amour et de la mer. This elegantly textured work will be sung by mezzo-soprano Hailey McAvoy, who, in addition to Bard, has studied at The Tanglewood Institute, The Franz Schubert Institute in Austria, and the University of Rochester-Eastman School of Music.

The first part of the program concludes with one of music’s most important and best known works for orchestra, Claude Debussy’s Prélude à l’après-midi d’un Faune of 1894. This iconic, but relatively brief tone poem defined both the waning of 19th century French romanticism and the beginning of impressionism, arguably 20th c. modernism as well. The “Prelude to the Afternoon of a Faun” is justly famous for its stunning, incredibly beautiful textures – a veritable textbook of orchestration and much beloved by music listeners throughout the world.

After intermission 20th c. works of Joseph Canteloube, Maurice Ravel, and Darius Milhaud follow. The first set of Canteloube’s Chants d’Auvergne, five settings in the obscure Occitan language/dialect still spoken in southern France, was composed about 1924. These are in effect elaborately textured and musically sophisticated folksong settings of great color and vitality. They will be performed by soprano Addie Rose Forstman (www.addieroseforstman.com), whose career has taken her throughout the United States, including an appearance with the Albany Symphony Orchestra.

Composed about 1933 by Maurice Ravel, one of the twentieth century’s most imaginative and forward-looking composers, Don Quichotte à Dulcinée is a set of three very spirited songs. They will be sung by baritone Brad Testerman, who prior to his studies at Bard was a student at Peabody Conservatory in Baltimore. These three Don Quixote songs were created with great sensitivity to mood and text and were Ravel’s last completed works.

We conclude CITV’s presentation of seven remarkable French works for orchestra and for orchestra with voices with the vocal fireworks of Darius Milhaud’s Quatre Chansons de Ronsard for coloratura soprano. Written in 1940 these four songs are among the most demanding in the vocal repertoire. For this reason, performances, especially with orchestra, are not common. However, soprano SeolAh Yoo (www.seolahyoo.com), who has sung in Asia, Europe and the United States, is definitely prepared to meet Milhaud’s vocal challenges and promises to bring a stunning program to an equally stunning conclusion.