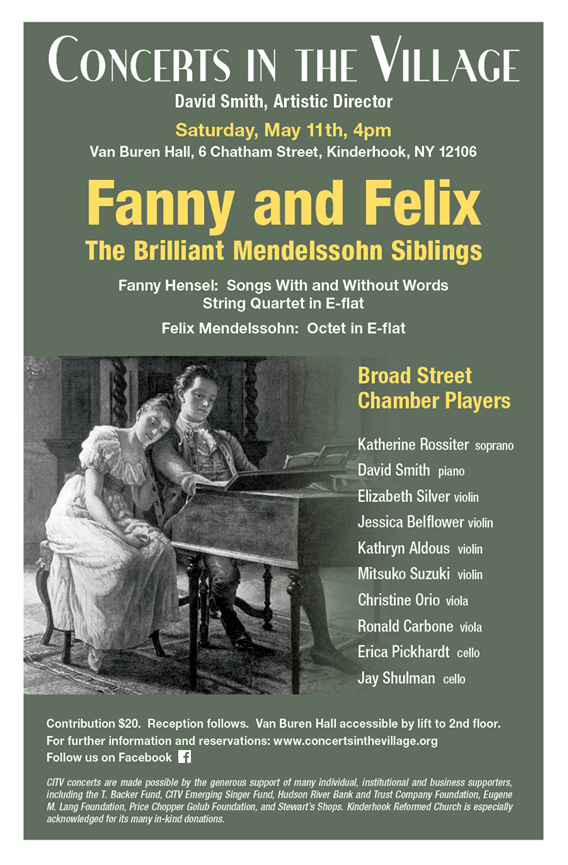 On Saturday, May 11th Concerts in the Village (CITV) will conclude its 9th season with “Fanny and Felix – The Brilliant Mendelssohn Siblings”. Performing will be the Broad Street Chamber Players, soprano Katherine Rossiter and pianist David Smith, CITV Artistic Director.

The first half of the program is devoted to Fanny’s songs “with and without words” and her remarkable String Quartet in E-flat, drawn from her total output of over 500 compositions! The richness, warmth and charm of Fanny’s songs are readily acknowledged by all who have heard them. Her “songs without words” are really short piano pieces of such lyrical quality that they are easily confused with those of her brother Felix. To encourage public acceptance, some of her compositions were in fact published under his name!

Following intermission, eight outstanding string players from the Broad Street Orchestra will perform the Octet, op. 20 by brother Felix. Although one of his most famous works, because of its performing demands and the difficulty in gathering eight qualified players, live performances of the great Octet are not frequent. Composed in 1825 in a matter of just a few months, when Felix was only 16, the drama and scale of this impressive work never fails to sweep listeners away, both musically and emotionally.

Says David Smith, “With this program CITV celebrates the most important sister-brother relationship in all of music history, certainly the closest. The much better-known Felix Mendelssohn and his slightly older sister Fanny Mendelssohn Hensel were highly exceptional both as pianists and as composers. This is commonly acknowledged for Felix, but less often so for Fanny. Prior to the mid-nineteenth century women in music had few opportunities to publish and fewer still to perform in public. Regardless of their gifts, they remained largely unknown. This slowly changed with the career of pianist-composer Clara Schumann and more decisively so with the winning of the Prix de Rome by Lili Boulanger in 1913. Fortunately in the last fifty years Fanny Mendelssohn Hensel has finally begun to receive the attention she so richly deserves.”

Katherine Rossiter, soprano, a performer with diverse experience spanning from opera to musical theatre and oratorio to art song, is originally from Mechanicsburg, Pennsylvania. Earlier in the 2018-19 season, she was heard as the soprano soloist in Bach’s Coffee Cantata with the Broad Street Orchestra. This season, she has also appeared in recital with pianists, Kayo Iwama and Gili Melamed-Lev as part of the Concerts at Camphill Ghent concert series and as the soprano soloist in Vaughn-Williams’ Serenade to Music and Beethoven’s Mass in C with the Bard College Orchestra. In the 2017-2018 season, Ms. Rossiter was the soprano soloist with Classics on Hudson in Handel’s Messiah and in a staged production of Requiem for Anna Politkovskaya at the Richard B. Fisher Center for Performing Arts. In the summer of 2018, she attended the Académie National d’été de Nice in Nice, France to work with Lorraine Nubar and Dalton Baldwin, and she was seen as Venere in L’incoronazione di Poppea at the Berlin Opernfest. The 2016-2017 season included her debut with the Grammy-award winning Albany Symphony Orchestra singing the soprano solos in Bach BWV 78: Jesu, der du meine Seele, an appearance with the Bard Baroque Ensemble singing the soprano solos in Vivaldi’s Gloria, conducted by James Bagwell, and a New York premiere of selections from Gregory Spears’ Owen Songs at the Morgan Library in NYC.  Ms. Rossiter’s operatic roles include Morgana in Alcina, Le Feu/Le Rossignol in L’enfant et les sortileges with CCM Opera d’arte, Mabel in The Pirates of Penzance with the International Gilbert and Sullivan Festival, Drusilla in L’incoronazione di Poppea with the New York Lyric Opera Theatre, and Die Zweite Dame/Erste Knabe in Die Zauberflöte with the Bard Vocal Arts Program.  Katherine Rossiter is an alumna of Dawn Upshaw’s Graduate Vocal Arts Program at Bard College Conservatory of Music, as well as the University of Cincinnati, College-Conservatory of Music. 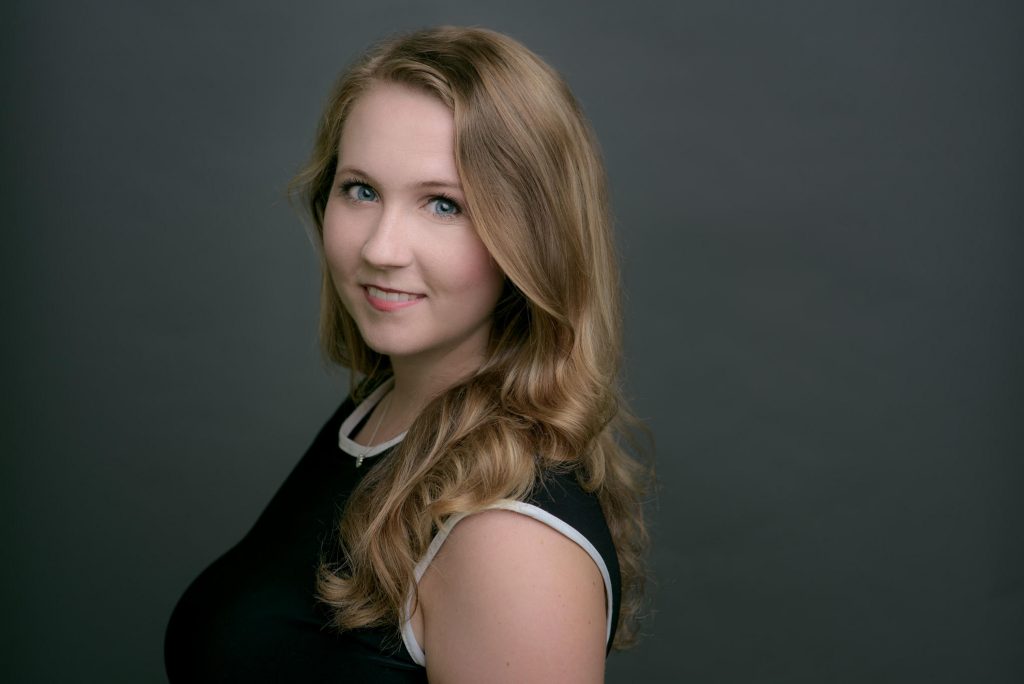 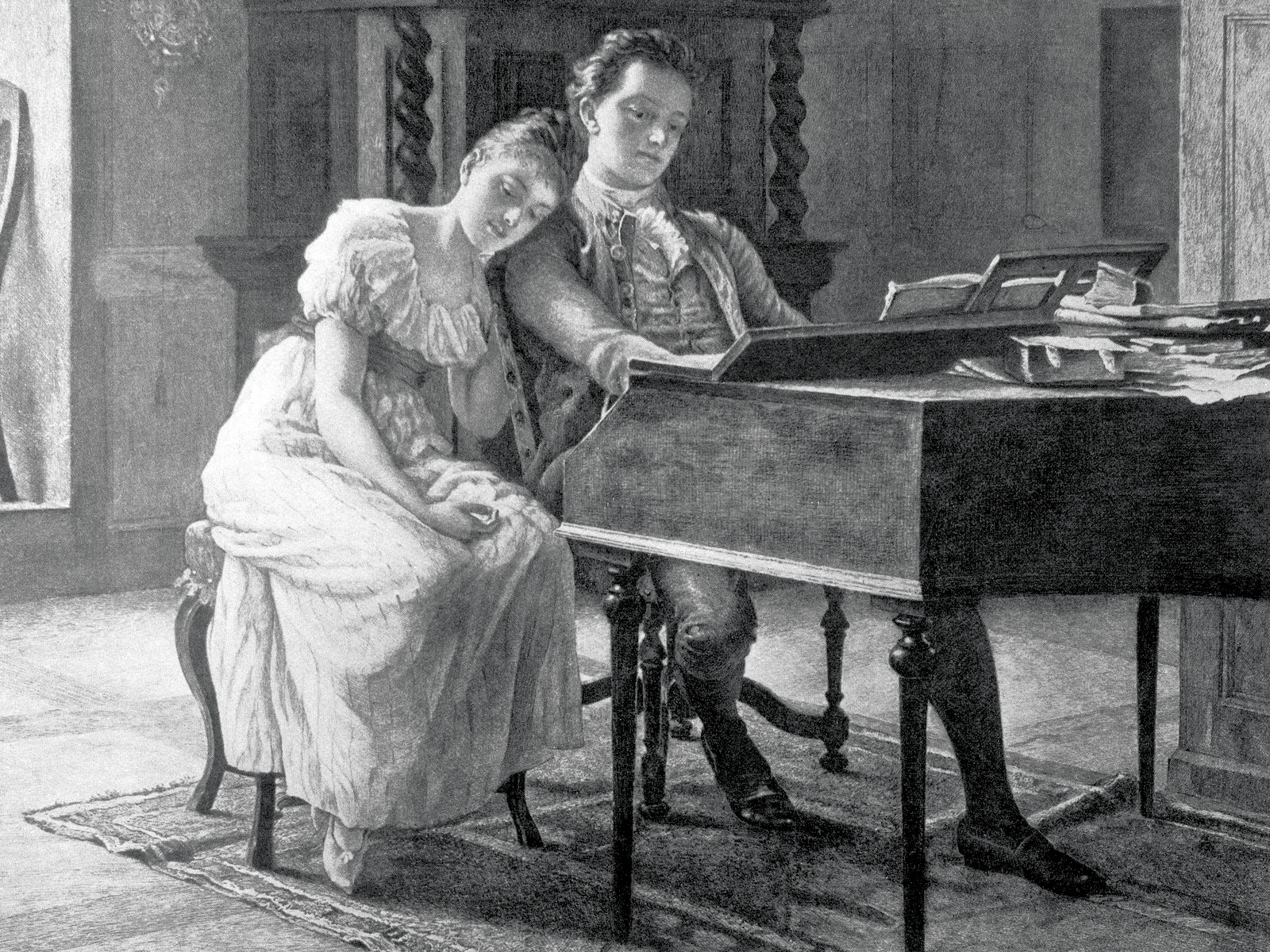 Fanny and Felix at the Piano