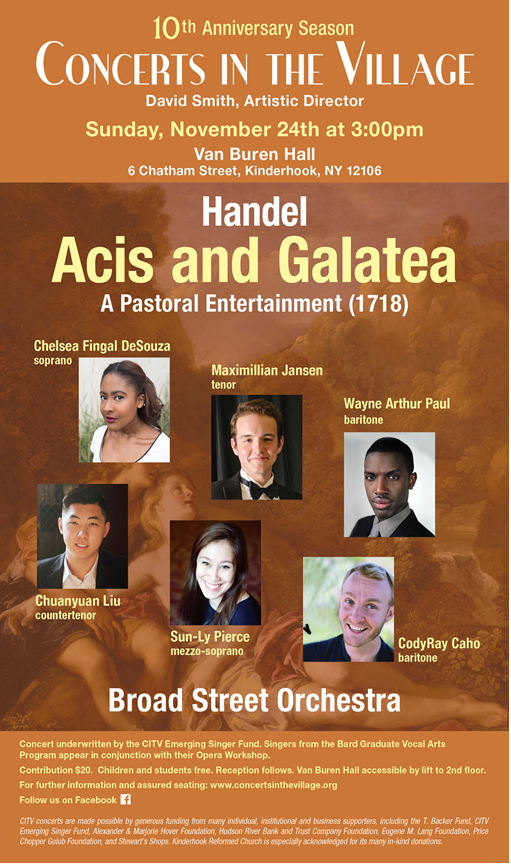 Concerts in the Village continues its 10th Anniversary Season on Sunday November 24th when six singers from the Bard Graduate Vocal Arts Program join the Broad Street Orchestra to offer Handel’s Acis and Galatea. This compact “semi-opera” was with good reason Handel’s most frequently performed work during his lifetime, and among his dramatic works the only one to remain continuously in the repertoire over more than three centuries. Under the direction of Artistic Director David Smith, CITV’s performance is believed to be a regional premiere.

The young lovers Acis and Galatea will be sung by tenor Maximillian Jansen and soprano Chelsea Fingal DeSouza. This will be Jansen’s second CITV appearance, following his enthusiastically received solo performance in CITV’s offering of Bach’s Mass in B Minor this past July at PS21 in Chatham. From Cincinnati, Jansen’s opera experience has included Così fan tutte (Mozart), Albert Herring (Britten) and The Magic Flute (Mozart). Chelsea Fingal DeSouza, a graduate of the New England Conservatory, has had extensive experience in art song, as well as contemporary and Baroque music. Her concert appearances have included the requiems of Faure and Mozart, as well as the Stabat Mater of Poulenc. Her dramatic roles have included that of Atalanta in Handel’s Serse.

The comically terrifying role of Polypheme the one-eyed giant will be sung by baritone Wayne Arthur Paul, who in 2018 was soloist in CITV’s performance of the Mozart Requiem. Also a graduate of the New England Conservatory, this season Paul is singing at the Metropolitan Opera, making his ensemble debut in a critically acclaimed new production of Porgy & Bess. Dramatic and concert opportunities have taken him to Boston and Los Angeles, among other destinations. Countertenor Chuanyuan Liu, who assumes the role of Damon in Acis and Galatea, began singing less than three years ago, but quickly found his artistic voice as a countertenor. A graduate of the University of Virginia, he recently made his debut with Chicago Summer Opera. His dramatic roles have included works of Handel, Monteverdi, and others.

Chinese-American mezzo-soprano Sun-Ly Pierce, in the role of Dorinda, will be making her third CITV appearance, including a warmly received performance of excerpts from Berlioz’ Les nuits d’été this past February. Recent appearances have included Stravinsky’s Pulcinella, and the role of Olivia in the west coast premiere of Jennifer Higdon’s opera Cold Mountain. In addition to winning the Marilyn Horne Song Competition at the Music Academy of the West, Ms. Pierce was a Semi-Finalist in the Kurt Weill Foundation’s Lotte Lenya Competition. Baritone CodyRay Caho was an undergraduate in vocal performance at the State University of New York at Fredonia, also holding a graduate degree from Arizona State University. The organizations with which he has performed include Arizona Opera, Cincinnati Opera, American Lyric Theater, and the Aspen Music Festival.

CITV Artistic Director David Smith observes, “For our offering of the very entertaining Acis and Galatea I can hardly imagine a more talented ensemble of singers. Our listeners are certainly in for a very special treat, one perfectly scaled to the ideal acoustics of Kinderhook’s Van Buren Hall. And to this we add the region’s premiere chamber orchestra, CITV’s own Broad Street Orchestra. What more could a listener ask for?”

This concert is underwritten by the CITV Emerging Singer Fund.