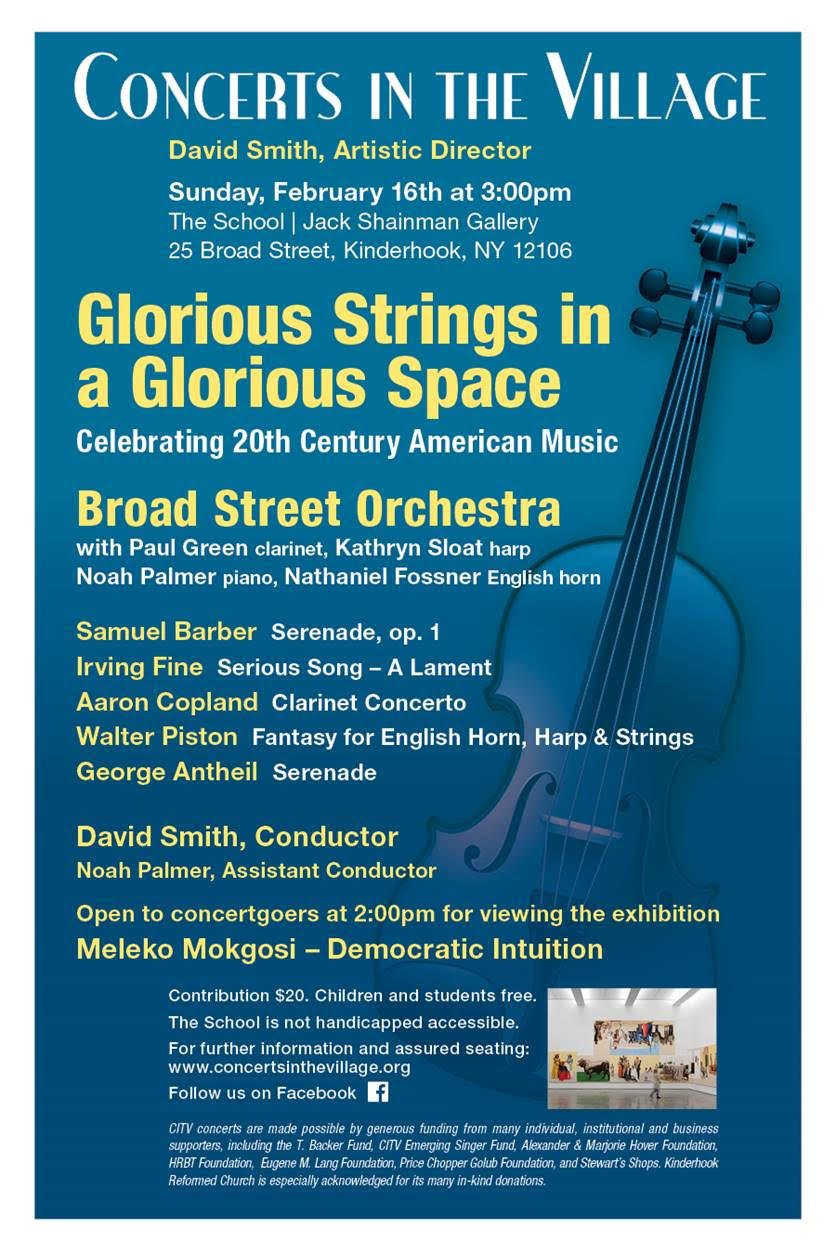 Says David Smith, “Many now neglected treasures created during this important period in American music are long overdue for our attention. I am confident that listeners will be both stimulated and moved.”

This will be CITV’s 42nd concert. The strings of the Broad Street Orchestra, one of CITV’s two resident ensembles and the region’s premiere professional chamber orchestra, will be joined by four outstanding instrumental soloists in a program of American orchestral masterpieces written between 1928 and 1955. Artistic Director David Smith will conduct, along with Assistant Conductor Noah Palmer.

Included will be Aaron Copland’s Clarinet Concerto, composed for Benny Goodman in the late 1940’s. For this well-known work virtuoso clarinetist Paul Green will be joined by harpist Kathryn Sloat and pianist Noah Palmer. Copland’s concerto, a dazzling marriage of jazz and classical idioms, takes full advantage of the clarinet’s extremes of range and character. Samuel Barber’s imaginative Serenade of 1928 opens the concert with an engaging mix of lush string writing and dance-like rhythmic energy.

Also included will be Walter Piston’s tranquil Fantasy for English Horn and Harp of 1952. Featuring Nathaniel Fossner, English horn, and Kathryn Sloat, harp, the Fantasy is an impressionistic work suggestive of Ravel and including ravishing duets for the two solo instruments. Irving Fine’s “Serious Song: A Lament” of 1955 has been described by its composer as “an extended aria,” and by Leonard Bernstein, Fine’s close friend and colleague, as “rich, sensitive, emotional music.”

For the conclusion of the program, the demands of George Antheil’s whirlwind Serenade of 1948 reveal the stunning brilliance of the Broad Street Orchestra strings. Antheil was a composer whose creative genius seemed to know no limits, extending to the writing of mystery novels and remarkably even to the development of a sophisticated technology used in radio-controlled torpedoes, a patent for which he shared with none other than the famous actress Hedy Lamarr, his fellow designer!

Says CITV Artistic Director David Smith, “I am particularly grateful for this opportunity to present works so richly representative of mid-20th century American music, including the important, but now largely neglected ‘neo-classical’ repertory. Our program for February 16th promises to be both enjoyable and ‘ear-opening.’ As CITV followers already know, performing such virtuosic works for strings guarantees richness and a real sense of urgency. I promise that our journey ‘all the way back to the 20th century’ will be memorable, each work having been carefully chosen to highlight the unique visual and acoustical characteristics of the main galley at The School in Kinderhook. CITV is grateful to be in this space once again.”

From 2:00pm concertgoers will have the opportunity to view the current exhibition at The School | Jack Shainman Gallery: “Meleko Mokgosi: Democratic Intuition”. For additional information about the gallery and this exhibition please visit http://www.jackshainman.com/school/

Contribution $20. Students and children free. This location is not handicapped accessible. 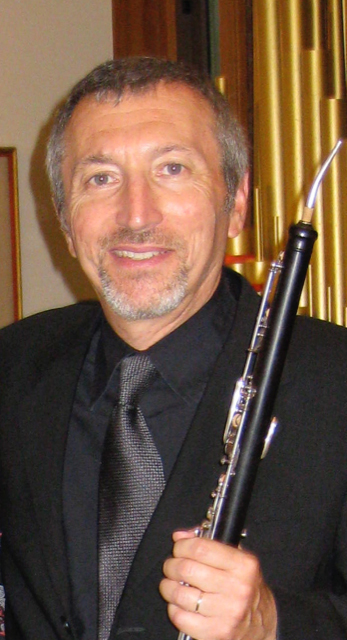 Nathaniel Fossner has been the solo English horn with the Albany Symphony for the past 40 years, appearing on all of the orchestra’s Grammy nominated recordings. He performs regularly throughout the Capital Region on all woodwind instruments, thoroughly enjoying the concert stage or sitting in theater pit orchestras for national Broadway tours. He is a founding member of the Adirondack Saxophone Quartet which performed classical and jazz influenced music in the region for over thirty years. His musical training started with his father and mother, respectively principal oboe and keyboard of the Albany Symphony in the 1950’s. After attending the Eastman School of Music and Teachers College, Columbia University, he was a Bandsman in the United States Military Academy Band at West Point, NY. Mr. Fossner is most thankful that he had a full career in music education, teaching instrumental music in public schools and training young teachers at the college level in music pedagogy classes. He still teaches privately and demonstrates woodwind instruments in schools for the Albany Symphony. Mr. Fossner is a proud member of the American Federation of Musicians and serves as Vice President of Local 14, The Albany Musicians’ Association and is the Union Steward of the Albany Symphony. Since 2013 Mr. Fossner has performed regularly as a member of the Broad Street Orchestra. 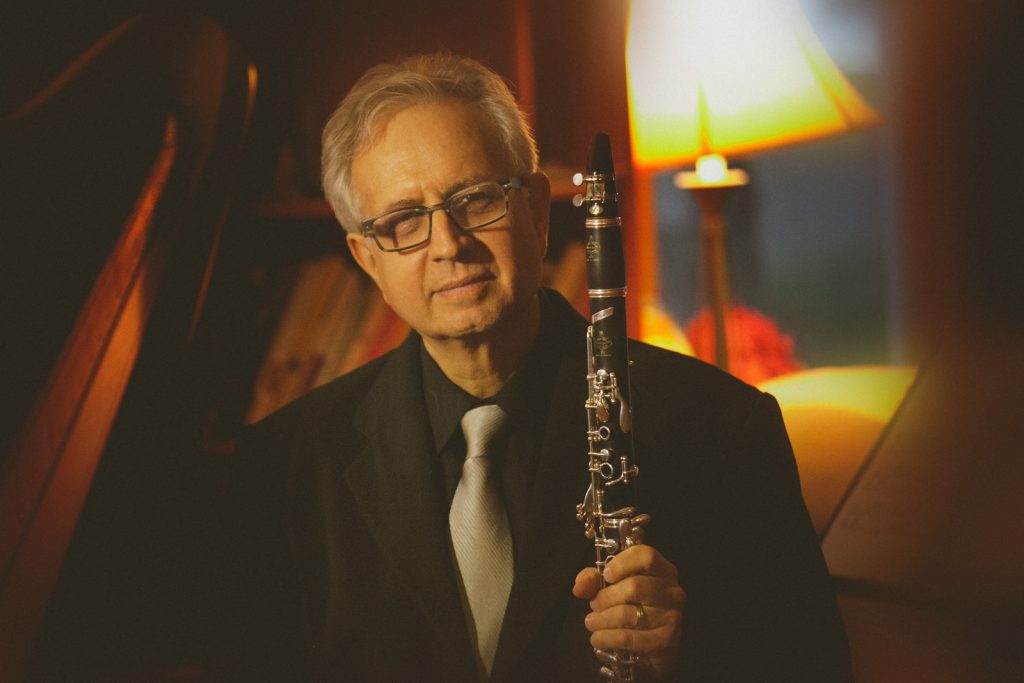 From his TV debut at age 13 with Leonard Bernstein on the New York Philharmonic Young People’s Concerts Series to his current status as a master teacher and soloist, clarinetist Paul Green has defined new paths on the concert stage. Grounded and virtuosic in the classical tradition, he has pursued his passion for jazz and followed his yearning to explore the meaning of Jewish music while maintaining his classical concert career. Winner of the Young Concert Artists International Auditions, Green’s solo recitals have garnered enthusiastic reviews in The New York Times. He has collaborated with the Borromeo, Saint Lawrence, and Ying quartets, and has collaborated with cellist Jacqueline Du Pré, flutist Eugenia Zukerman, and pianists Richard Goode, Christopher O’Riley, William Wolfram, Ursula Oppens among many others. In 1997 Green was selected as an Artistic Ambassador for the United States Information Agency for which he concertized in Moldova and the Middle East. He has participated in international festivals of contemporary music in Krakow, Poland and Chisinau, Moldova, as well as the 2002 International Clarinet and Saxophone Festival in Xian, China, the Wienermusikseminar 2002 in Vienna, the EuroArts Festival in Pusan, Korea, and as a soloist in Brasov, Romania in 2003. He has been soloist with the National Orchestral Association, the Charlotte Philharmonic, Hartford Symphony, the Santo Domingo Music Festival Orchestra and many others. He has served as principal clarinetist of the Florida Grand Opera, Atlantic Classical Orchestra and Symphony of the Americas. Green founded the Gold Coast Chamber Music Festival in South Florida and The Summer Celebration of Jewish Music in the Berkshires. Green’s discography includes “Return to the Concert Stage” (classical), “Klezmer East: Traditional Favorites” (klezmer) and “Coming Together” (Jewish-jazz fusion). In Florida he served on the faculties of several universities, and now teaches at Skidmore College, Williams College, and Schenectady County Community College. Green studied with noted clarinet pedagogue Leon Russianoff; Keith Wilson at Yale, where he received a bachelors degree in theory and composition; and Joseph Allard at the Juilliard School, where he received a masters degree in clarinet performance. In 2009 he received an additional masters degree in jazz performance at Florida International University. A former attorney and legal writing professor at Brooklyn Law School, he also has an LLM in taxation from New York University. As an arranger he fuses the elements of America’s homegrown art form, jazz, within the klezmer tradition. Paul Green is principal clarinet of the Broad Street Orchestra, with which he performed the Clarinet Concerto of Mozart.in 2017. 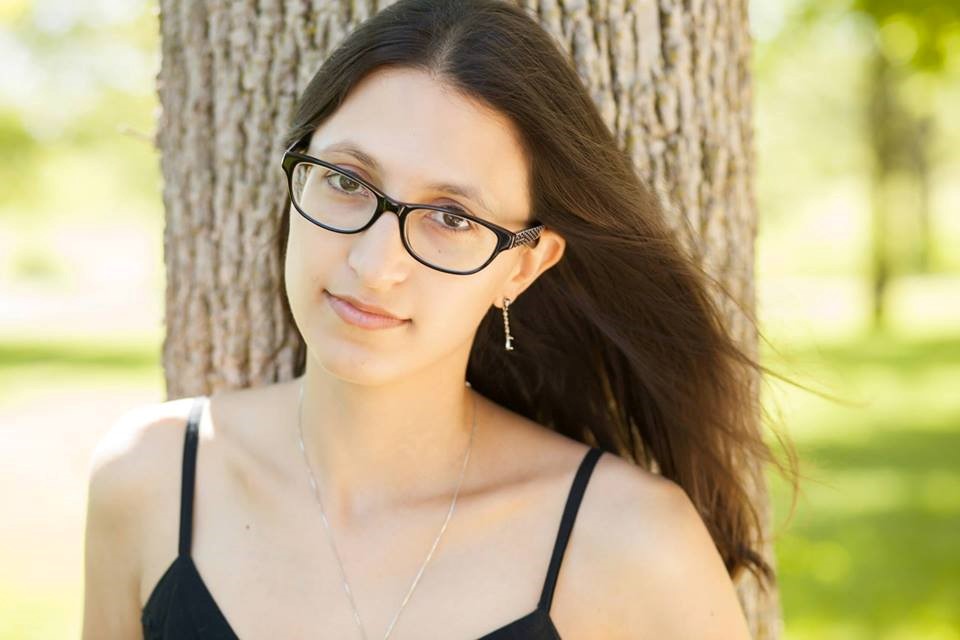 Kathryn Sloat, “whose harp playing evoked the angels” (Brooklyn Discovery), is known for her work in opera and contemporary chamber music in New York City and throughout the United States. She is a member of the contemporary harp duo Lilac 94 with whom she has had the honor of performing at the American Harp Society’s 2015 National Conference in Logan, Utah, the Fresh Inc Festival in Wisconsin and Chicago, as well as various chamber music series along the east coast. Kathryn has also worked with a number of composers in bringing their music alive through initial readings and concert performances for the New York Composers Circle and Secret Opera. As an orchestral harpist, Kathryn has performed in a variety of festivals with conductors such as Keith Lockhart, JoAnn Falletta, Leon Botstein, Larry Rachleff, and a notable performance with conductor Krešimir Batinić and the Zagreb Philharmonic in their Carnegie Hall debut for the premiere of Malek Jandali’s Luminosity, a four-movement sinfonietta for chamber orchestra inspired by and dedicated to the Syrian children. With a passion for performing in musical theatre and opera, Kathryn has played in pit orchestras for Off-Broadway and regional theater productions of Once Upon a Mattress, The Fantasticks,  A Light in the Piazza, Peter Pan, and others.  As a member of the Ohio Light Opera Orchestra, she performed works from this repertory including Rodgers and Hammerstein’s The King and I, Cole Porter’s Silk Stockings, and Johann Strauss II’s The Gypsy Baron. She has also subbed for Radio City’s annual Christmas Spectacular. Kathryn has worked with various small opera companies in New York City for performances such as Carmen (Tricities Opera), The Rape of Lucretia (New Camerata Opera), and Tosca (Loft Opera). Kathryn takes a special delight in performing the works of composer Benjamin Britten. First hooked in college when she played her first Britten opera, Albert Herring, and then again with her first performance of The Ceremony of Carols, she has since played numerous Britten operas and put on her own production of his chamber works for harp entitled “A Birthday Hansel for Benjamin Britten.” Kathryn pursues as many opportunities as possible to play this great composer’s music. In addition to her performance work, Kathryn is a dedicated harp teacher. She has taught individual and group lessons as a private instructor and as a part of the National String Project. Since 2014 she has been an assistant harp teacher at the Connecticut Valley Harp Intensive, and has given educational performances and workshops as a member of her harp duo Lilac 94. In the summer of 2019 she was the harp teacher in residence at the Luzerne Music Center in upstate New York. Kathryn was recently appointed as a harp instructor at the Diller-Quaile School of Music and at the Dwight School in New York City. Kathryn Sloat holds degrees in harp performance from the Crane School of Music, Eastman School of Music, and Mannes College of Music. She currently lives in Manhattan and will someday own a cat. While she maintains a rigorous schedule of performance and travel, she does manage to fit in some free time to knit, read, and hike the Adirondack mountains.