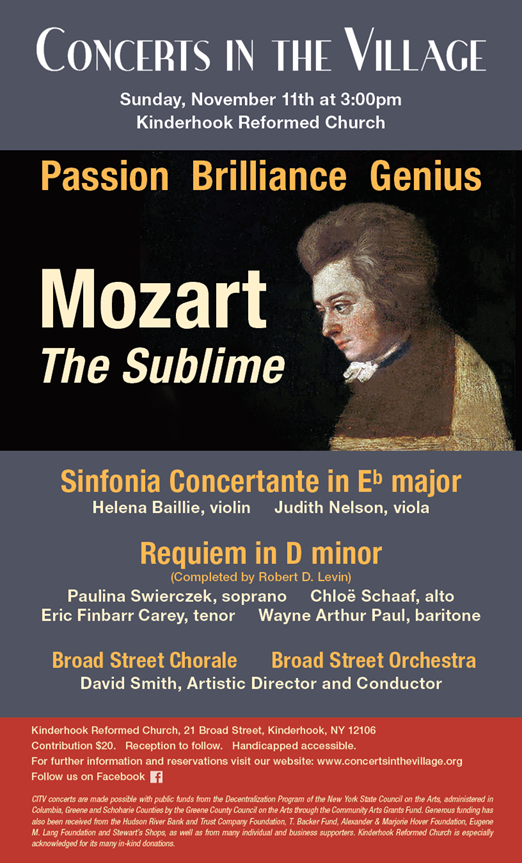 At 3:00pm on Sunday, November 11th Concerts in the Village continues its 9th season with the Broad Street Chorale and Orchestra joined by guest soloists in performances of Mozart’s brilliant Sinfonia Concertante for violin and viola and the immortal Requiem.

This is believed to be the first performance by a regionally-based ensemble of Robert D. Levin’s completion of the Requiem, Mozart’s last but unfinished work. CITV Artistic Director David Smith will conduct.

Composed in 1779 the Sinfonia Concertante is a masterpiece of virtuoso writing for violin and viola. In form it is a hybrid between concerto and symphony, reminding the listener of Mozart’s unchallenged creative genius. The demanding solo parts will be performed by violinist Helena Baillie and violist Judith Nelson. Born in London, Ms. Baillie’s studies have been at the Curtis Institute of Music and at Yale. Having performed all over the world, she now teaches at Bard and resides in Dutchess County. A native of Oregon, Ms. Nelson has been a member of the New York Philharmonic since 1983, living both in Manhattan and in Columbia County. Her studies were at the University of Washington and The Juilliard School. Ms. Nelson’s performing experiences have included the viola concertos of Hindemith, Walton, and Bartók.

Says David Smith, “I am honored, in fact thrilled, to have Helena and Judy with us in November. They represent an incredibly talented and experienced pairing in one of Mozart’s most striking concertos. I know they share my enthusiasm for what we will be offering.”

The great Requiem of Mozart follows. In Smith’s opinion, “Even in its incomplete state, this is a much-beloved masterpiece. The surreal circumstances surrounding its commission and composition have inspired plays, musicals, movies and novels. The Mozart Requiem has become with good reason a legendary work. Fortunately the brilliant American scholar and keyboard specialist Robert Levin has given us a powerful, but entirely appropriate completion. And it is not by accident that our performance of the Requiem also commemorates, to the day, the centennial of the armistice concluding World War I.”